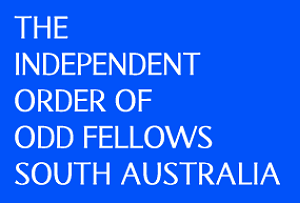 The Basic furniture for operating a Suitable Lodge Room

A Lodge room must be in a private location so that the Lodge may meet with the knowledge that non-members may not hear or see the proceedings of the meeting.

The traditional layout of a Lodge room is shown in the examples (left). Tables or benches with table cloths and chairs for the members in the correct place will suffice. If the Lodge is small, a small meeting room would suffice.

The Grand Lodge of South Australia will provide a Dispensation for the applicants to meet and be introduced to the principles and practices of Odd Fellowship as part of the plan for a new Lodge to be instituted. Five (5) Past Grands (former lodge chair persons) will attend the meetings for up to one year to ensure adequate preparation to form a Lodge. The Past Grands or Past Noble Grands will hold the Elected Offices of the Lodge for the first year.

Initiating the Applicants for a New Lodge

If it is an Odd Fellows brother Lodge there will be the Initiation and then the First, Second and Third Degree. Receiving the Degrees of the brother lodge may take a number of meetings. For the Sister Lodge, the Rebekah Degree will be conferred on the applicants.
Installing the Officers into their Stations in the New Lodge

Having set a date for the Institution of the new Lodge, and the granting of a full Charter, the Grand Master will travel to lead the formation meeting of the Lodge. The prospective members will convene a meeting at the new Lodge Room, and the Past Grands will open the Lodge on behalf of the Applicant Members, and then proceed to confer such Degrees of the Odd Fellows Lodge as may be suitable on the new members.


The Aim of the Lodge

For a new Lodge, the primary objective is to have the benefit of recruiting new members in a new area. The Lodge meetings will then involve the Lodge in actively conferring the Degrees on new members. Through conferring the Degrees, the Lodge will find its true meaning, and members have the most to gain. The old fashioned way is for those conferring the Degrees to do so from memory. Although this would be most impressive, it is practical and acceptable to conduct the ceremonies reading from books. This is the Australian standard. European Lodges, however, are much more strict, and Lodge work is carried with great precision and sincerity, without the aid of books.

As the Odd Fellows have Lodges all around the world, there is the opportunity of taking part in universal ceremonies in a number of languages. The Odd Fellows Lodge is conducted in the following languages:

Presently all Lodges in Australia and New Zealand conduct their Lodge Meetings and Ceremonies and Business in English. However, as Australia in particular is a multi-cultural social landscape, it seems fitting to provide the opportunity to people of running an Odd Fellows Lodge in Australia using a language other than English. The benefits of running an Odd Fellows Lodge in a different language will differ depending on the intention of members

The system for beginning a Multi Lingual Lodge is the same as for starting a new Lodge. However, after being invited and being Installed into their Offices, the new Lodge members would then proceed with conducting their Lodge according to the Books and Ceremonies provided in the Language of choice. If, for example, Swedish was the language of choice, the New Lodge would then Initiate new members according to the Swedish Ceremony. The Installation of Officers of the Lodge would have to be conducted in English, as the Grand Lodge of South Australia is presently only capable of doing the Installation of Officers Ceremony in English. The unwritten work of Odd Fellows Brother and Sister Lodges is uniform across the world, and the ceremonies and Lodge workings are very similar in structure and content.

Back To The Top